I fished the St Lucie Canal, and the current was strong.  I used a bottom rig with a 3 oz bank weight and a 30 pound test mono leader.  The bite was off today, but what did hit was too big for my rig.  Since I was using the heavy weight, I was able to cast out into the canal a lot further than I usually do from my "secret hole".

Hook was a 1/0 Hahke hook, and my bait was some truly stinky chicken liver.  When I took the hit, my rod tip just bobbled a bit and line started running out.  I had the drag set light, so that's not a surprise.  When I picked up the pole and started applying the drag, the line still kept running, until I had the drag nearly tight enough for a big Cobia on the beach.

I now have a really good idea that I have a pretty good sized fish on, since as of this point, my medium heavy rig is seriously bent, and I'm fighting the fish hard.  It took me about 40 minutes to work the fish in to the seawall to attempt to land it.  Good point:  I got to see and identify the fish.  Bad point:  I didn't have a landing net with me since I biked it to the hole, and didn't expect a fish that big, anyway.

Anyhoo, what I got to the seawall was a BIG flathead catfish, between 40 and 48 inches long.  This put the fish in the 35 to 50 pound weight class, and I'm rigged with 30 pound braid and a 30 pound mono leader, so I'm not shocked that the fish snapped the line right at the end.


Now, I would have released this fish anyway.  When a Flathead gets that big, they aren't good eating, first and foremost.  Also, when they get that big, it means they are a superior fish and desirable breeding stock, so we want to return these monsters alive if possible.  If this was a big female, she lays millions of eggs every time she lays, so it helps maintain the stock of superior fish.

The takeaway lessons here are that
1)  Always have a landing net.......period.  I could have at least gotten a photo trophy if I'd had my landing net.
2)  There are some really big cats in the canal, and I think I know where to start looking for them, and I may do some drop line fishing with my heavy rig and 80 pound test running as a freeline and live bait, and a big hook, and see what I can land.
3)  When you hook a fish that big, even if you lose it at the very end, it
s still a fun fight, and so what, the fish won today, maybe you will on your next encounter.

Email ThisBlogThis!Share to TwitterShare to FacebookShare to Pinterest
Labels: Flathead Catfish, Huge Catfish, St Lucie Canal, The One that Got Away

Sustainability and the Fisherman.....

So, I'm trying an experiment in sustainability.  First off, last month, 60% of the meat in our meals were caught with my poles.   My goal is around 80%.   We had a good variety from salt and freshwater sources for fish.  I'm also riding my recumbent trike more, to my closer fishing holes, about a 10 mile radius.

With my touring trailer, I can carry my gear, and a piece of PVC pipe makes a great fishing pole rack, zip tied to the back of the seat o the backrest. 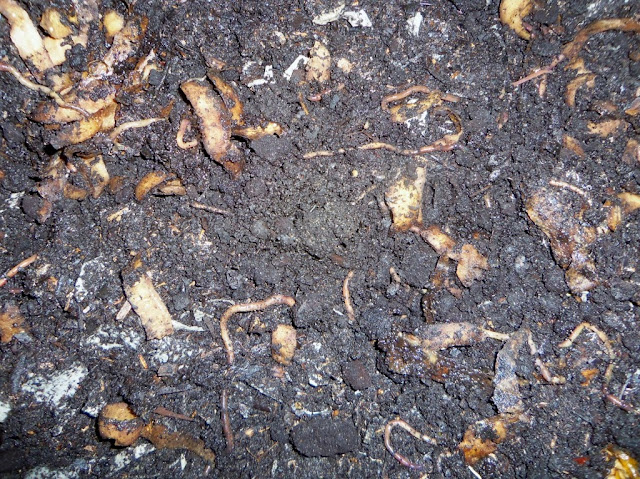 OK, First, the information to present.  Jensen Beach Causeway Park West is going to be closed to fishing and such n July 20 and 21, for the Goombay Bash.  Unfortunately, it's already sold out, so I won't be buying tickets, it seems.

Now, to the fishing on the Causeway.  Salinity is still low, and the bite is off significantly.  Water temperature is quite warm, in the 80's.  Water conditions were weedy and the tide was running fast..  My catch was a half dozen stingrays in the 5 pound range, and 3 tiny hardhead cats.  Not a banner day, but I did get to try out a recipe I've been meaning to;  Sauteed Stingray Wings with garlic sauce.
Posted by Unknown at 10:34 AM No comments:

More on Freshwater Fishing; Fishing in the rain from Chantal

They say that a dedicated fisherman has his lines in the water, rain or shine.  They also say that low pressure improves the bite, and I can tell you that that is true. 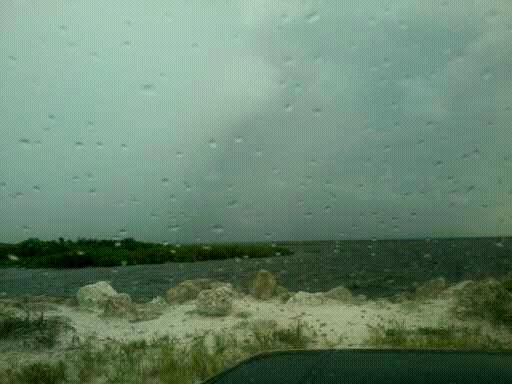 This was what the weather looked like, or worse.  This is Lake Okeechobee with a thunderstorm blowing in.. It's hard to tell, but the lake is very rough with some pretty big chop out there. 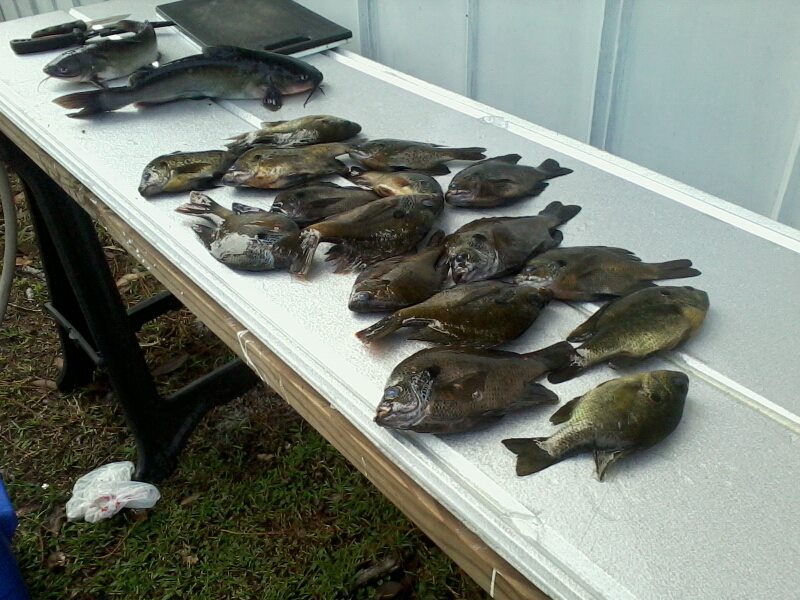 Here was my take for the day.  16 assorted sunfish and bluegills, all pretty good sized and two channel cats.  The bigger of the two was quite the acrobat, by the way.

I say this, because this cat was a strong, wily, challenging fish.  It was a male, by the way, and about 24" long.  He was also a jumper.  He got lots of airtime, trying to throw the hook.


View Freshwater Fishing in Martin County in a larger map


I've been exploring the freshwater opportunities around Martin County, and will add to this map as I go.....well, except for a couple hot catfish holes I want to keep my little secret.
Posted by Unknown at 11:56 AM No comments: